Koka Noodles is something I discovered on a trip to Bhutan. It has a lighter, tangier flavour compared to Maggi, and the noodles themselves are lighter & don’t give you that stone-in-the-stomach feeling that Maggi does. So OBVIOUSLY I had to have it when I came back to India.

Also, Koka noodles aren’t native to Bhutan – meaning they have variants from Singapore & Indonesia. But I loved the twist that the Bhutanese give to their Koka noodles & that’s what I’ve tried to recreate.

This is a recipe for a meal for two. Just halve the ingredients if it’s a one-person meal.

How to make it: 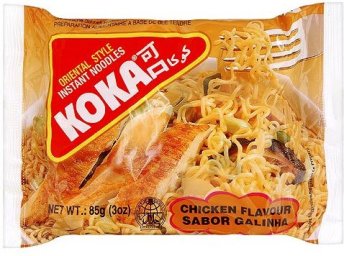 Just follow the instructions on the Koka Noodles packet to make the noodles.

PRO-TIP: One I received from a friend of mine is to cook the noodles just in water. Add the oil & masala that comes with the packet in a bowl and mix it with the freshly cooked noodles, instead of cooking it WITH the noodles. Can anyone say flavour explosionzmxzxmxcm?

You do get packets of Koka noodles in India too. You can order it through Big Basket or Amazon . It is slightly more expensive than Maggi is, but oh so worth it. In Bhutan, this turned out to be the cheapest meal alternative, because Rs 60 and you were stuffed & satisfied.

Fry your bacon with a drop of oil. I never use oil while frying bacon because it releases so much oil & fat that it’s an overload. Once your bacon is nice & crispy you can set it aside.

I usually fry my onions in the residue bacon oil because I don’t like adding more oil and because more bacon flavour omg. If you feel like that is unhealthy/don’t want that bacon up in there dump the oil & use a teeny bit of vegetable oil. Just fry your onions till they are caramelised/crispy.

If you’re REALLY culinar-ily handicapped then ok fine, here goes. Heat up a pan, add a teaspoon of oil. Meanwhile break an egg into a bowl and whip it, till it is nice and fluffy. Pour into hot pan and wait until the top solidifies and then flip it. Cook until both sides are slightly brown.

PRO TIP: When the egg slightly cools down a bit, roll it up and then slice it. You’ll get the long strips of egg that you usually see in Koka in Bhutan.

Layer your plate with noodles, sprinkle on the onion & bacon and grind some schezwan pepper on top.

Basically the idea is to have crispy sweet onion, salty crunchy bacon to balance the spicy & chewy aspect of the noodles. Ok I’m drooling as I write this – going to fix myself a plate. Tata and enjoy!