When the organisers tried to placate them and said there was drinking water, one woman yelled back, “We just need the books, not drinking water”.

It was every book-lovers’ fantasy come true. Harper Collins was having a garage sale at insane prices (see below)

Squeezing yourself through a sweaty mass of people just to be churned through another sweaty mass. It was like a concert but without the thumping bass – just the thump of books tumbling down as yet another overburdened cloth bag had enough.

The sale timings were 10 am to 6 pm. At 9.30 am itself, there was already a sizeable crowd outside the Harper Collins warehouse gate in Faridabad.

After filling up the registration form, we found another huge crowd inside the gates.

The organisers had tried to have a measured entry by calling out names from the registration forms and asking them to enter one-by-one but the eager bibliophiles soon started getting restless.

But with the promise of cheap books just a few metres away, all hell broke loose. Seven-year-olds to seventy-year-olds started yelling “Hurry”, or “Read the next name fast”. Others in the crowd grumbled how it was worse than the board exam results.

And they took to Twitter to express their angst:

. @HarperCollinsIN People should go only if they want to feel how pilgrims feel right before a stampede happens. #harpercollins

As the lines moved achingly ahead, people started getting agitated and wondered the point behind the slow entries. “I’ve seen more crowds in Big Bazaar” heckled one young man.

If only Big Bazaar could’ve seen this crowd.

Entering the warehouse is a bit like how the Wildlings attacked the Wall – a desperate rush to fulfil a misplaced goal. In this case, the leisure of perusing through books being Castle Black.

An irrational FOMO (Fear of missing out) sets in as you see multiple hands reach out to grab books off the shelves. Cardboard boxes, cloth bags, crates, even trolleys were rapidly filling up and you join the melee.

There isn’t time to read the synopsis on the book jacket. You had to (pardon the pun) judge the book by its cover amidst the obligatory “Excuse me” and “Could you move ahead”. The possibility of death by suffocation seemed very real.

The collection was varied – from French cookbooks to a biography of the band K.I.S.S., there was something for everyone. Copies of Solomon Northup’s “12 years a slave”,  F. Scott Fitzgerald’’s “The Great Gatsby” and several beautiful coffee table books were aplenty.

But the really treasured ones like the “A Song of Ice and Fire” box set on which the wildly popular TV show “Game of Thrones” is based, was gone within minutes.

There was no clear flow of footfall and it soon turned into a logistical nightmare. Impromptu billing stations were set up but with lack of planning it turned into twisted queues full of irritated people waving their book-filled boxes in the air.

Once you finally extricated yourself out of the melee, a sense of relief washes over you and you stumble out the exit, vowing not to go back in again.

“It felt like a war zone” – Swati Bora, shopper

You see the next group of people standing under the blazing mid-day sun waiting for their turn and you can’t help but share a sympathetic smile as puzzled construction workers stand nearby wondering how mere books could attract such a massive crowd.

It seems like it was too much for the organisers too – the two-day sale closed down on day one itself and some reported that stocks were exhausted by 1pm itself.

Due to an overwhelming response, the HarperCollins book sale at our warehouse in Faridabad is closed and will not re-open on June 25th.

And Delhi NCR is not happy:

#HarperCollins Woke up at 7, travelled 30 kms, walked through mud to feel sweat trickle down from my neck to ankles. Came back empty handed.

Is this a joke?Were you expecting to be underwhelmed? Why weren't you better prepared?Delhi is ANGRY. #HarperCollins https://t.co/PBpQVBeXMe

All said and done, buying books is never a waste of money. 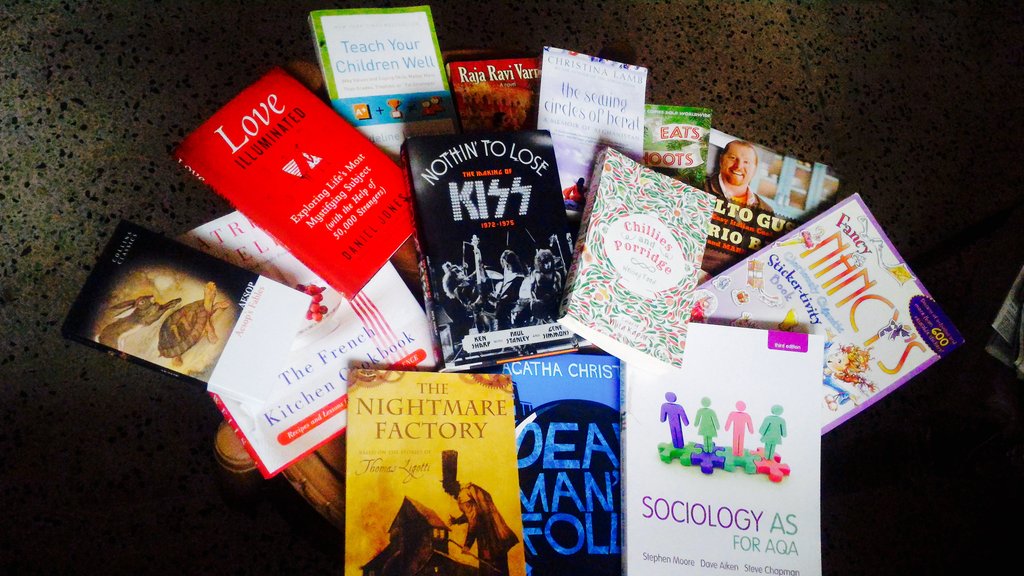 Hover over the image for more info on the books.

And lessons for the next book sale:

Hopefully there will be another book sale soon and this time both the seller and the buyer will be better prepared.