Not afraid to experiment? Tick.

Make memories that will haunt your taste buds for a long time after? TICK TICK TICK.

How better to spend your evening than to stroll amongst beautiful architecture framed by the magnificient Jama Masjid. We had this NDTV article as our guide and we set off by taxi from Noida.

Best (cheapest and fastest) travel route to/from Jama Masjid: Take the metro to Chawri Bazaar and a cycle rickshaw from there to Jama Masjid. It shouldn’t cost more than ₨ 50. This interactive map should help you figure out the metro route.

Side note: While we were in the taxi, the driver told us that we would’ve gotten free food if we had worn burkhas. I haven’t tried this out yet, but I didn’t see anyone (other than the poor) getting free food. He looked at us in our t-shirts and jeans and said, “Like this you won’t get free food”. He went on to say that if we didn’t wear shawls, those men would look at us boori nazar ke saath (translation: lustfully).Then he went on to add this gem: “When a man looks at a woman lustfully, it is a sin both on the part of the man and the woman”.

Getting back to the main point:

We strolled hand-in-hand enjoying the sunset while the Jama Masjid trilled the evening prayer, signalling the beginning of the breaking of the day-long fast. We took the first left from the masjid’s Gate no. 1 and entered Matia Mahal.

It was gorgeous. The lane was wide enough for a car to pass through but not two. If you’re coming via your own vehicle it’s advisable to park it outside near the mosque and do the walk on foot. If you don’t you’ll be stuck in human traffic amidst a lot of cursing and tch-ing.

Bits of tender crunchy chicken, rolled up in a sliver of rumaali roti, stuffed with finely sliced onions and liberally dipped in the fiery sauce

You can spot it by the wizened old man who sits on his haunches in front of a massive wok/kadai filled with bubbling oil. He picks up tender pieces of chicken that have been marinating in a special masala for hours and drop them in. The sizzle is enough to make you want to race upstairs to the little room and wait hungrily.

We ordered the Crispy fried chicken (about 250 gms of it) and this beauty came in a short while.

There was something like a chaat powder sprinkled over the chicken that we would soon find out would be sprinkled over every meat served in the street. It was served with a waif-ish rumaali roti which went really well with the crispy chicken, finely sliced onions and a masala sauce.

Caution: The sauce is insanely spicy – I ended up hiccuping non-stop after making a roll filled with bits of tender crunchy chicken, liberally dipped in the fiery sauce. But hey, I’d do it again. #YOLO.

Next on our list was Cool Point which was literally right across the lane from Haji Mohammed Hussain’s. There were large vats of colourful shahi tukda sitting there royally. Neither Lizane nor I had had it before and we had no idea what it was going to taste like. But boy, were we excited! And for good reason.

It was served in a little aluminium box and was hot hot hot. We gingerly spooned a bit into our mouths and that was it – hello la-la land.

It’s difficult to explain the emotions you go through when you taste something inexplicably, surprisingly delicious. It stirred some faint memory of bread pudding but I kid you not I thought it was alternating crunchy and soft bits of golden gulab jamun topped with creamy khoya, pistachios, spices and bits of tutti-frutti. (Turns out it’s fried slices of bread in milk and ghee but still drool-worthy nonetheless)

It was one of those moments I will never forget: I felt the din of street quieten down for a few seconds while the plethora of flavours waved through my taste buds – I’m pretty sure my pupils were dilated for a bit afterwards.

It was so good that we got another 4 packs parcelled and were so lost in its afterglow that we forgot to pay! We hurried back embarrassed to no end after the owner started yelling “Aye! Aye!”.

Where: Rose milkshake stall next to Haji Mohammed Hussain’s 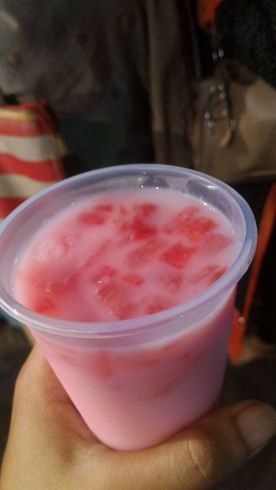 on the list was to try the Nihari at Bilal’s but we were thirsty and to our lucky, next to our dear Haji Mohammed Hussain’s was a man selling glasses of what I can only describe as refreshing rose milkshakes with watermelon chunks in it. He first skims the watermelon pieces from the top and drops it into the glass and then proceeds to pour in ladles of frothy milkshake. He also gave away free glasses to a couple of poor women who were begging nearby.

Side note: A mute beggar-woman kept prodding me for money while I was at this stall. I was hoping she’d get bored and move on to the next person, but man was she persistent! Finally she pushed a 5-rupee coin into the crook of my elbow and pointed at a 10-rupee note I was clutching to pay for the drink. Beggar-economics shamed me into giving her the 10 rupees and the 5 rupee coin.

After that we were *kind of* full and just went around exploring the area. If you want to shop, then the possibilities are endless. Sherwanis, kurtas, burkhas, prayer hats, carpets, mehendi, odds and ends and innumerable “Fancy” shops. Walking there is an experience in itself – you feel yourself to be part of a human wave connected by food and festival. Cycle rickshaws brimming with 7-8 children will gently brush past you and you have to keep your footing firm or you will get jostled into lanes you previously hadn’t thought about entering. The lane seems endless, as so we found when we kept walking. We finally decided to turn back and on the way spotted another stall that was on the guide.

Where: A little further ahead after Cool Point (very vague, but he’s pretty distinctive)

This was a sweet surprise. The proprietor looked exactly like he did in the picture and remarked that many people came to his stall after reading the guide. He looked just like the other rose milkshake seller and was extremely friendly. He ladled in the cold brown juice. It was either made using sugarcane or jaggery , my Hindi isn’t the greatest – he called it Ghannu juice. Nevertheless, it was very refreshing and invigorated us into doing a little more food exploration.

And at Rs. 5 a glass totally, totally worth it.

Where: Bilal’s restaurant – Next to Haji Mohammed Hussain

Served in a flat dish and topped with sliced green chillies, this tender meat gravy is intensely packed with flavour.

Then we decided that we just couldn’t miss the Nihari at Bilal’s after re-reading the line that said “…The meat is slow-cooked for hours which makes it delicate and tender”. And we were not disappointed at all.

The ambience isn’t the greatest and if you get queasy about it, just have a look at the big drums filled with simmering meat and then you forget everything else. Served in a flat dish and topped with sliced green chillies, the gravy is intensely packed with flavour. Don’t go looking for actual meat pieces – they’ve all fallen off the bone and melted into the curry. Moti Roti is the perfect accompaniment to this. One, the blandness and crunchiness helps offset the smooth spiciness of the Nihari and two, it helps soak up all that flavour in a way spoons never can.

Where: Right opposite Jama Masjid, a little further down the road 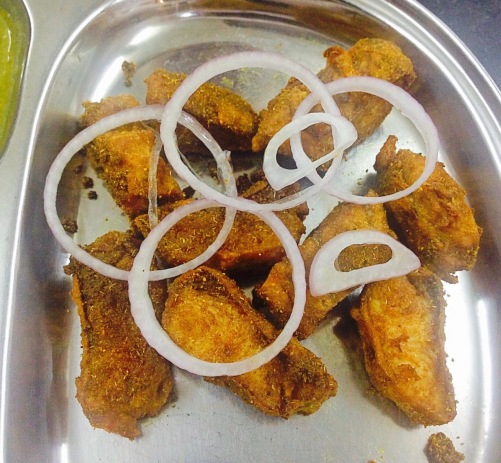 Lizane remembered that on her previous trip to Delhi about 3 years ago, she had had some Singara fish. It was so good that it’s been on her mind ever since. We walked around asking for it, but had no luck. Finally on the wide street opposite the resplendent Jama Masjid, we hit gold. Crispy fried Singara fish, with that spicy, tangy powder liberally sprinkled over and topped with sliced onions. It is often served with Rumali roti, but it’s complimentary. So remember to check before digging into it.

What a great (and healthy) way to end the evening. With our stomachs stuffed and pockets not as light as we feared, we made a vow that we would return soon and find more hidden culinary gems in the bylanes of Old Delhi.