If someone asked us what our itinerary for our Vietnam trip was, Tulsi & I would say, “To try some food!”.

Essentially we had drawn up a list of all the food we wanted to try  and planned our day around it. After 14 days of eating our way through Vietnam, Here’s a list of the top 10 dishes I’d LOVE to eat again.

Tulsi declared, “I will eat Pho every single day in Vietnam”. (Pronounced ‘Fuh’ like the beginning of the Hindi word for fruit, Fal). It’s a bowl of rice noodles in a light, flavourful beef broth. It may also include slices of beef or beef meatballs depending on which part of Vietnam you’re in. 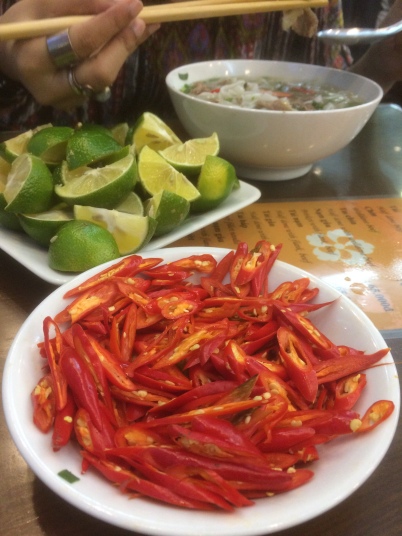 We overheard 2 tourists at the Kuala Lumpur airport talking about a particular Pho store in Hanoi. Eavesdropping totally paid off, ha! It’s called Pho 24 and is walking distance from The Backpackers Hostel (Original) in Hanoi.

Served with julienned chilli and lime, it still is one of the best things I’ve eaten in 14 days spent in Vietnam and Cambodia. The broth is light and flavourful, with lemongrass and spring onions giving that burst of freshness. We asked for half done beef Pho where the meat continues to cook once placed in the hot broth. I struggled a bit with the chopsticks at the start but it was too delicious to give up.

The Pho in Central Vietnam features beef meatballs, but essentially has the same light and fresh feel as the Hanoi Pho. 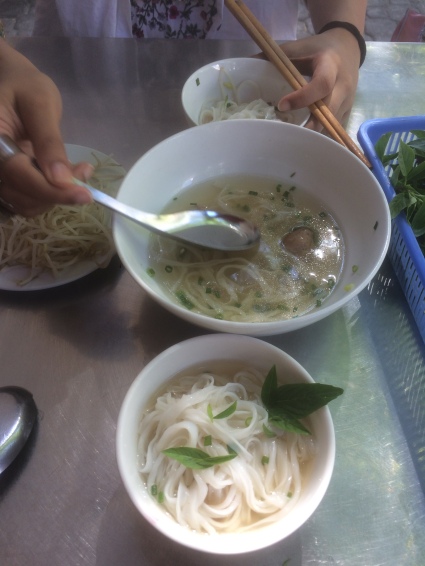 After a massive bowl of Pho you don’t get that sick “Oh my God I’m so full” feeling where you can’t move after. It’s that pleasant warm-stomach feeling after having homemade chicken soup. The best part was the cost – two bowls of Beef Pho cost 120,000 VND which is about $5, or roughly about 170 Rupees each!

The most basic way to describe this would be “like a Subway sandwich”. But oh my, this is like a Beyonce Subway. The Vietnamese baguette is made using rice flour and has a delicious crunch on the outside with the inside being chewier than regular subs. Which is great, because it is filled with fresh lettuce, pickled vegetables and slices of beef. Crunchy outside, chewy inside of the bread, crunch from the vegetables and the juicy meat – ah, absolute delight for the mouth.

It was very interesting to see how the Banh Mi was different in different regions in Vietnam.

My favourite has to be the southern one in Ho Chi Minh City – it’s lighter and tastes fresher thanks to the abundance of pickled vegetables sandwiched between the pate. Oh hello, happiness. Banh Mi is light on the stomach, as well as the pocket – costing about 25-40,000 VND – that’s about Rs 60 for a footlong stuffed with meat and vegetables. I love Vietnam! 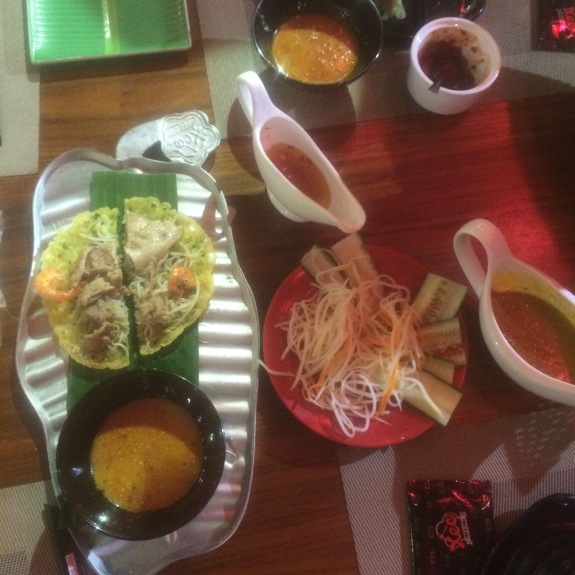 This dish is an explosion for your senses. So it’s presented like this and you have to assemble all the components together. Luckily for us, the waitress helped us out.

Here’s how you do it: First lay out the rice paper roll on a flat surface. Add a layer of lettuce and then put on your crispy pancake that’s topped with beef and shrimp. Post that, you can sprinkle on the sliced cucumber and pickled sprouts.

Here’s the tricky part, carefully rolling it up so that it’s tightly packed and nothing falls out. 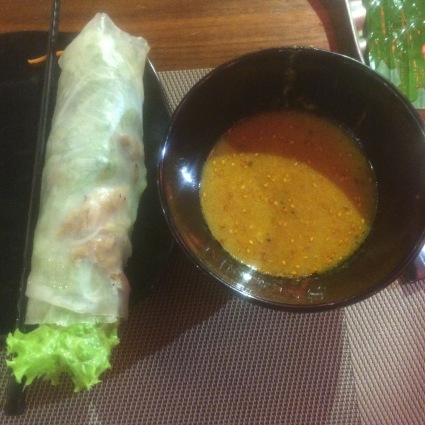 Once you have a perfect little roll, you can dip it in the mustard sauce/soy sauce/fish sauce.

And that first bite – Oh my god. The rice paper adds that light elasticy feel as you bite into the crunch of the crispy fried pancake and the fresh vegetables. As your teeth cuts through the crunch, your mouth is suddenly filled with the juiciness from the shrimp and beef. I can still almost feel it – that’s how good it was.

In a spin on the Korean BBQ, we found this interesting BBQ place in the holiday city of Da Nang. 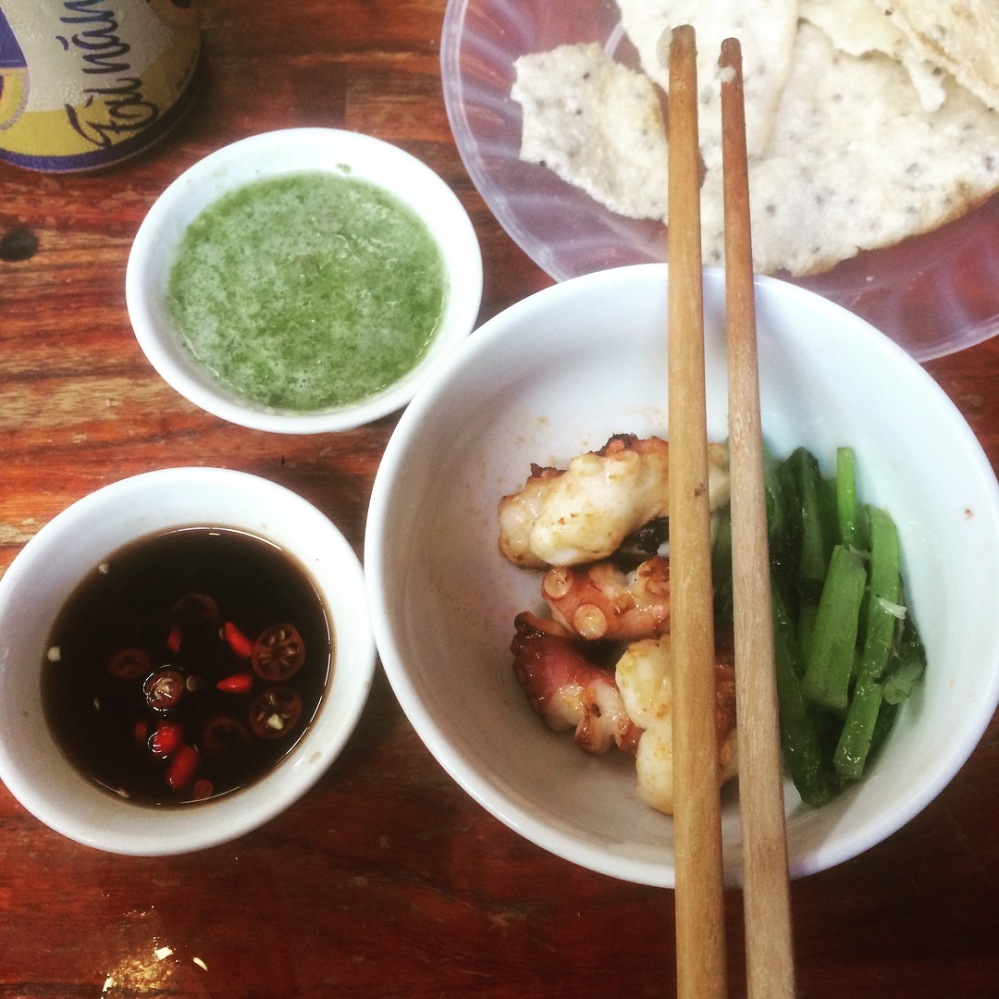 What I loved best about this place is that we were treated more like family than tourists – a sentiment we experienced throughout Da Nang. The owner recommended a couple of meats we could barbeque. We settled on octopus, pork and 2 helpings of beef (because it was so good)

The tabletop grill is placed on a chair next to you and you can grill the deliciously marinated meat to your liking. The owner also recommended we have some water spinach to go with the meat (no wonder the Vietnamese are so healthy)

The grilled meat can be dipped in a soya chilli sauce and a green chilli sauce that Tulsi swore she could drink bottles of.

Tulsi expertly grilled the meat. I attempted to do a little, but stopped after I dropped a slice of beef onto the coals. I still regret that moment of clumsiness.

We chilled for a while after we ate and one man came up and introduced his baby to us. Which was nice – until he kept bringing his baby close to my cheek, so I kind of had to oblige the poor baby with a kiss.

I love, love, love Vietnamese street food. Juicy grilled pork on skewers are as commonplace a feature on the streets as pani puri stalls here in India.

Slivers of beef, pork are grilled right in front of you and topped with a sticky sweet chilli sauce and sesame seeds. 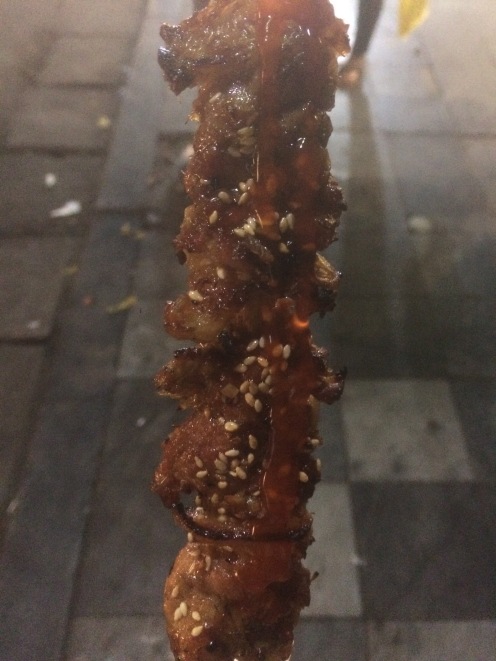 We accidentally walked into this restaurant when we were on the hunt for some Banh Mi. After apologising and leaving, we eventually found the Banh Mi place we were looking for. But we couldn’t stop thinking about how delicious the grilled fish looked. So we went back in and #noregrets at all. 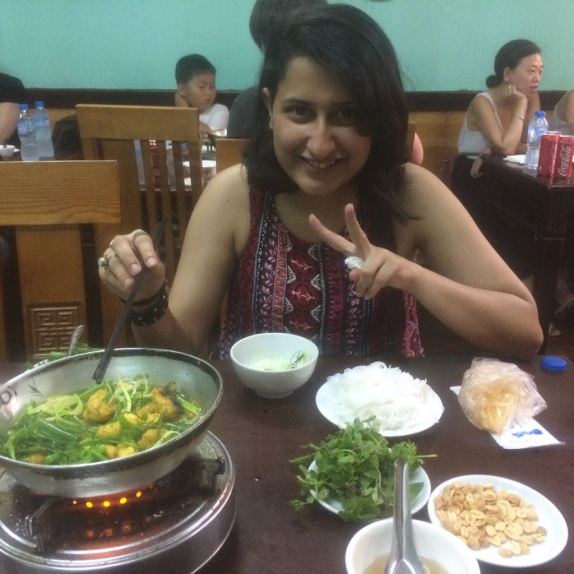 It was set in what looked like someone’s house, with pictures of their ancestors dotting the wall. There’s only one dish here – the grilled fish – and for good reason. It’s soooo good, but a little tricky as well. Like the BBQ place, we had to cook the fish ourselves, and add as much/as little greens as we wanted. We went cray on it, adding most of it and watched hungrily as it sizzled away. 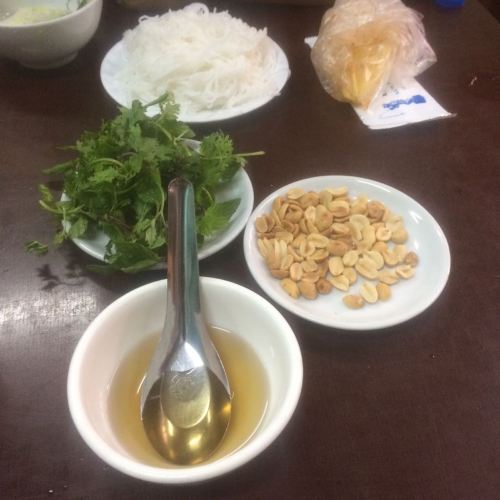 You’re given an assortment of accompaniments like peanuts, mint, fish sauce and thick rice noodles so you can build your own little grilled fish noodle bowl.

It was quite similar to the river fish we have back home, quite meaty and lightly seasoned with turmeric and salt. The real fun is combining everything – the salty, tangy and the fresh. For about $7.5/Rs 450/170,000 VND each, it is slightly more expensive that the other food in Vietnam, but it’s totally worth it.

7. Banh Cuon (a.k.a. what Tulsi dreams of every night)

This was another accidental discovery. We were looking for souvenirs at this place called ‘Hanoi Smiles’ in Hanoi, and the kind lady there recommended we eat at the Rice Pancake place opposite her store. As usual, the restaurant had playschool-sized tables and chairs which we awkwardly sat in while we waited for it. And oh we weren’t disappointed. 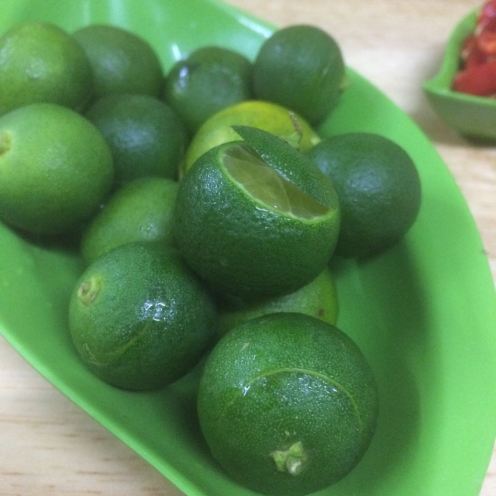 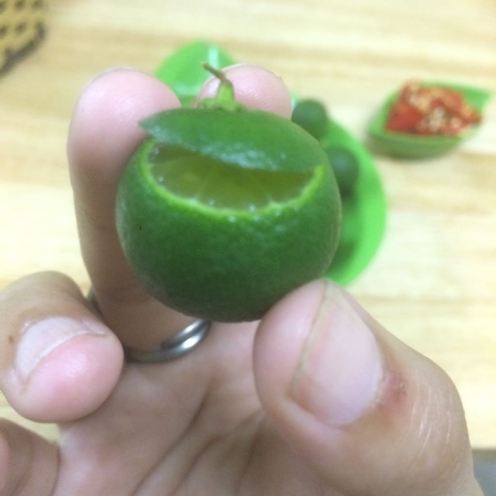 So this set of Banh Cuon had wood ear mushrooms with crispy fried onions inside thin rice pancakes, topped with chunks of pork salami and the pork floss we were looking for in our Bahn Mi, but did not find. Score! The restaurant owner very kindly seasoned our fish sauce bowls for us, with chillis, mint and a generous squeeze of lime.

This was a bit of a challenge for me, because we had to carefully pick up our stuffed pancakes with our chopsticks, dip it in the sauce and eat it while not letting a single sliver of yumminess fall down. With some great coaching from Tulsi, managed to do so… on the 10th try 😛

If it were up to me I’d put have everything with a side of Coffee. It’s absolutely DELICIOUS. DE-LISH-SHUS.

The word Egg with Coffee may sound off-putting, but it gives a nice, frothy feeling to the strong Vietnamese coffee. Similar to a cappuccino but way, way, WAAAAY lighter, fluffier and heavenl-ier. (I know that’s not a word but Egg Coffee breaks all the rules, grammar and otherwise).

The first Ca Phe Trung we had was at a small place where everyone just sat quietly smoking, sipping coffee and listening to 80s rock music. Perfection, and the coffee was really cheap. 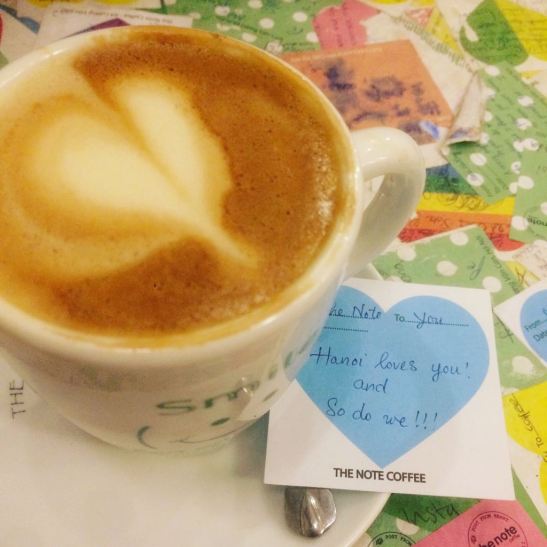 The next time we had it at a quirky little place called The Note Coffee not too far from the first place. It was slightly more expensive but we got to see how differently it can be enjoyed. Also the server kept showering compliments about our Indian-ness (felt like supermodels at that moment)

The only reason my darling Summer Rolls is at #9, is because it’s pretty similar to the Banh Xeo, minus the crispiness. But the ones we had in Hoi An get double points because of the location.

We found this place after Google Maps let us down (AGAIN) and we took a wrong turn and ended up on the river-side. This place was so beautiful that we ended up sitting there for nearly 5 hours, eating and talking away.

Lettuce & prawn wrapped up in rice paper and served with a side of soya sauce and sesame seeds. Ah! Fresh, light and tangy – perfect for an afternoon by the river. 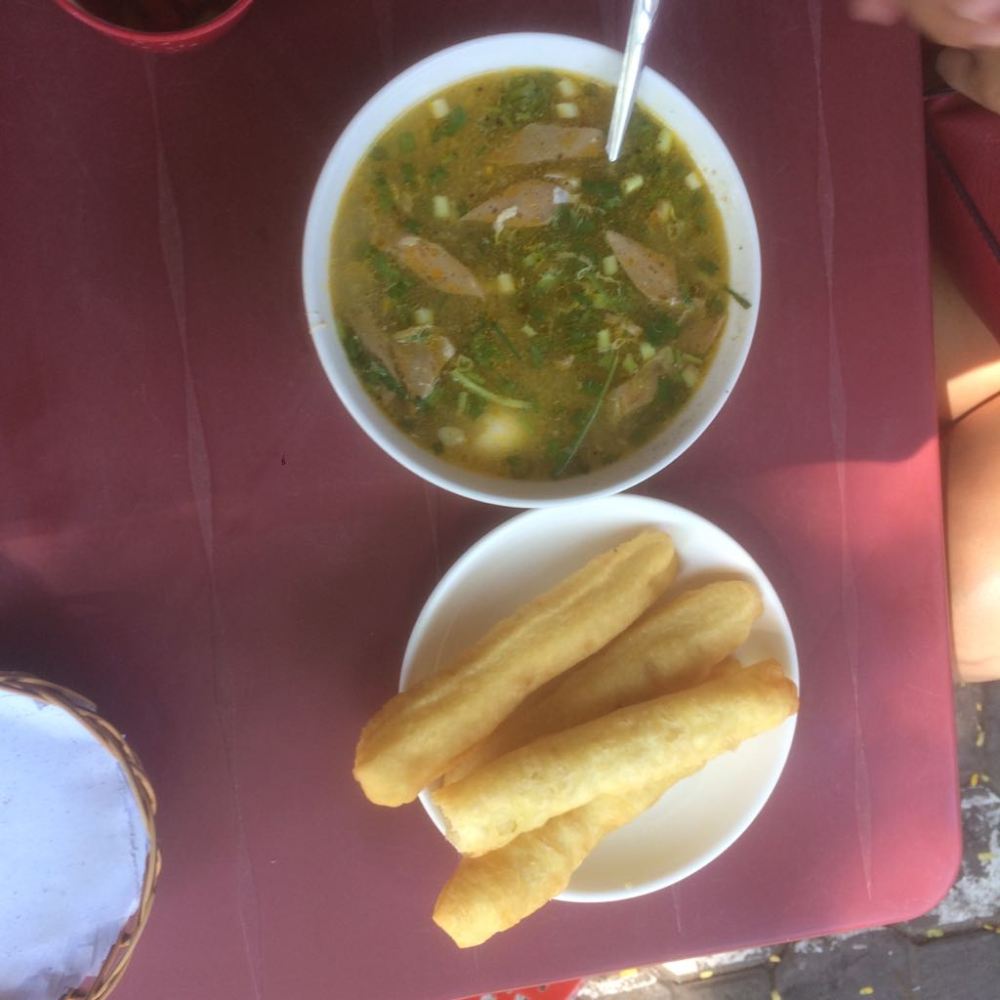 We had two types of Crab Soup in Vietnam, one in the Central Da Nang, and the other in the south in Ho Chi Minh City.

First up, the Da Nang Crab Soup. Like the other dishes, we found this one on the side of the street we were walking on. We pointed to the dish on the menu and the old woman sweetly nodded and handed us our soup within minutes, served with a side of golden fried dough sticks.

It was a light soup, with chunks of what tasted like crab/pork salami – not really sure what meat it was, but it was yum! The soup had the crab flavour, and slivers of crab meat, khus khus and my usual favourites – chilli, spring onions, lime & mint. Oh there was also a quail egg in there. Best part was dunking the crispy dough sticks, letting it soak in all that flavour and crunch into that juiciness immediately.

I forgot to take a picture of the second one we had at Ho Chi Minh. The setting was very different though – we were squatting in the midst of a bustling market. That crab soup was also light but filled with a lot more things.

It had a lot more eggs, including what I think was fermented egg because the egg was black. Though it was the white part of the egg, it tasted like the egg yolk. It was a bit heavy on the senses for me, considering it came after the chicken feet which only Tulsi was brave enough to try.